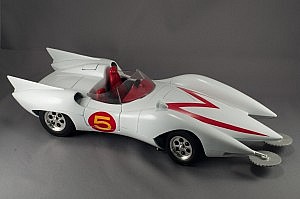 The Supercharged Mach 5 is an automotive machine incomparable to any other on the racing circuit. Its unique aerodynamic design, coupled with its special devices, makes this car the leader of a pack of little more than second-rate contenders.  An overview of the Mach 5’s control panel both enlightens and reminds us of the beauty of this truly remarkable machine. The hub of the Mach 5’s steering wheel features seven lettered buttons, each of which activates a customized accessory designed by Pops Racer.

Control A: “Releases powerful jacks to boost the car so that Sparky, our mechanic, can quickly make any necessary repairs or adjustments.” Although designed for this practical function, the auto jacks have also been used to “leap” the car short distances at high speeds, as a wedge to prevent the car from toppling over a waterfall, as an alternative braking systems, and as a tool to crush cars in a car-wrestling match.

Control B: Sprouts special grip tires for traction over any kind of terrain. At the same time, 5,000 horsepower is distributed equally to each wheel by auxiliary engines.” Definition of “any kind of terrain”: firm, icy, or unsteady ground; ocean floor; vertical mountainsides.

Control C: “For use traveling over heavily wooded terrain. Powerful rotary saws protrude from the front of the Mach 5 to slash and cut any and all obstacles.” The rotary saws have also been used as a means of self-defense.

Control D: “Releases a powerful deflector which seals the cockpit into an air-conditioned, bullet- and crash-proof, and water-tight chamber. Inside it, I am completely isolated and shielded.” The deflector also protects against sleeping gas.

Control E: “The control for special illumination which can be traversed singly or in tandem, and which enables me to see much farther and more clearly than with ordinary headlights. It’s invaluable in some weird and dangerous places that I race the Mach 5.” When used with the “night shades” attached to Speed’s helmet, his vision is enhanced with infrared light.

Control F: “Used when the Mach 5 is under water. First, the cockpit is supplied with oxygen. Then, a periscope is raised to scan the surface of the water. Everything that is seen is relayed down to me by television.” The 100-pound auxiliary supply of oxygen is enough to last for thirty minutes.

Control G: “Releases a homing robot from the front of the car. The homing robot can carry pictures or tape recorded messages to whomever or whenever I want to send them.” The robot also can carry handwritten messages, X-ray film, rope, and small Egyptian statues, and it has been used as a means of defense. The bird-like device is operated by a built-in remote control within the cockpit. A separate button sends the robot “home.” 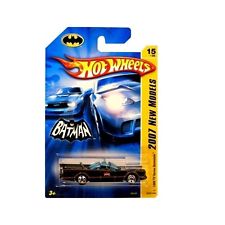 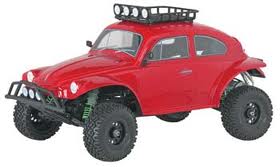